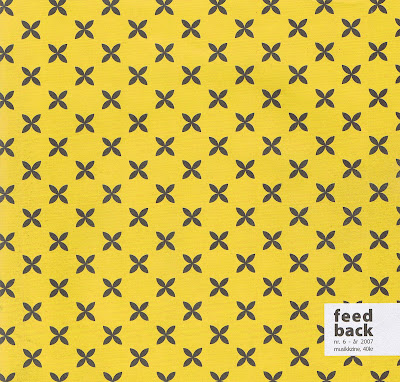 With the last edition off the Norwegian fanzine Feedback (#6) there was a compilation CD and a CD with Käthe kollwitz (the band, not the painter/activist). There has been several complaints about the records so Feedback have decided to put the records out for free download. So here they are.

The Bodø HardCore Festival compilation was done to promote the festival by the same name. All the artist had their fifteen minutes off fame during the week the festival lasted. Well let the music talk for itself; (styles range from punk/HC to rap and pretechnosynth)

Sinnsyk ugle is the hotest band in Bodø this year. Here they are with a unreleased live version of one off their "hits". Laura is a new girl trio from Bodø that has lasted a year and has just released a EP where their contribution to this compilation is borrowed from. Manna is Norways most famous reggae band.On this dub version they has got vocal help from one off Norways most famous rap artists; Jørg-1 off Tungtvann fame. Jimbo Jones track is from their comming album that shall be out somtime during 2008. Magnus Eliassen has out a 7" and a album that has been out for free download on his web. Joddski (aka Jørg-1) with a unreleased track (?). PLX-15 with a unreleased live version off their biggest hit. Raggabalder is both a duo band and a DJ act into reggae/dancehall/ska. The Spectacle track has never been played live or been released before so this is a real treat for the fans.

Both tracks recorded at Hunstad kultursenter in Bodø before the band moved to Oslo, where they now live and play. Demo was recorded by Jørgen Rist Holmen and later Hallstein Sandvin has done a mix off the tapes at Hønsehuset lydstudio in Bodø that ended up on this CD. The band can be contacted here. Käthe kollwitz did a legendary concert at the festival and is more than ready for bigger festivals, longer tours and most off all a great record contract. 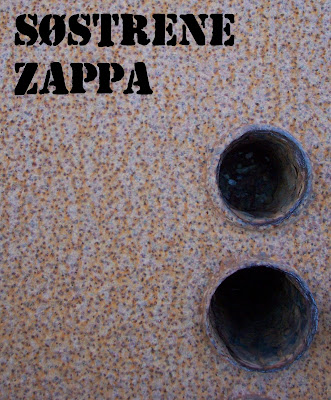 Sorry no English translation because if you don’t understand Norwegian you wouldn’t understand the humour inn the lyrics, and that is what makes Søstrene Zappa so much more than just another band/duo/artist.
Lagt inn av NXP kl. 05:33 Ingen kommentarer:

NXP - Your Soul Is Ill


ClubGamers video to my track "Your Soul Is Ill". The track is included on the compilation album "Kill Kill Kill" (Out 1. December 2007) and on next years NXP album. Untill then you can buy my last album on Go To Gate Records here and you can download my latest EP for free from Ambolthue Records here.

More info on the album "Kill Kill Kill" you will find here at the end off this month.
Lagt inn av NXP kl. 00:44 Ingen kommentarer: 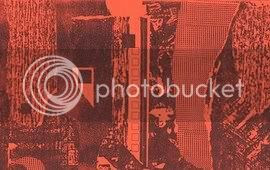 Untitled came in several cover variations, all made by Runar Karlsen.

De pravity (et bein). After being in several experimental Bodø outfits like “ “ Part, Remi Langmo teamed up with Jon Hveding. They had a whole bunch off names on their projects/duos/bands. Most off them is to be found on the Bla bla vol. 1 compilation cassette. One off these projects was De Pravity (et bein). They did a concerts as a trio including Buster from “ “ Part, but on this contribution they was a duo.

After a while with several names they ended up as PLX-15 and were a pre-techno duo (later trio) that released several cassettes and was included on compilations. Got not much attention since they was before their time. They toured a lot but without much success, so they broke up.

Langmo has after PLX-15 broke up, been solo artist under several names, like Remi and Wiipoor Will. He has released cassettes under both those names. Before, at the same time and after DE Pravity (et bein) broke up, he was in bands like The Gate, X-omatic, Manna, Humdinger and H.C. Electronic Orchestra.

Hveding moved to Oslo at the end off PLX-15. There he has been in a lot off bands like Behind Bars, Wantoslam, Bøyen beng, Crossbreed, Drunk a.o. They was all into punk and HC and they has released several albums, except Wantoslam that has tracks on compilations too look back at. Especially Bøyen beng toured a lot, also in Europe. They even had a minor commercial hit with the track “Månebarn”. After moving back to Bodø late in the 90`s he startet postpunk outfit HumdinGer. Later he quit to be a fulltime member off the reggae band Manna, and still is.

Fâlx Çèrebri. For more information visit his MySpace, you find it here.

Famlende forsøk. The band was started early in the 80`s and have since released a lot off cassettes and two LPs. They have also several tracks on compilations. Started as a band heavily influenced by the Industrial Records wave of band from the 70`s, like Cabaret Voltaire, Throbbing Gristle and others. They soon left the trademark off their origins and have since that, never looked back. FF plays a strange and experimental music somewhere between Faust and Einstürzende neubauten, with a heavy dose Nurse With Wound and has not ever sounded like any off these bands. They sound like FF, that’s it.

Before and at the same time as they was involved in FF they has played in several bands and solo projects. Most off them are on compilations or on their own releases on the bands label Shit Tapes that changed name to Chaos some years ago. Off all this side bands/projects I assume that The Smell Of Incense is the most well known.

Dan Mc Kinney. I could not find any info about McKinney on the internet. There is a piano player with the same name, but I don’t think it’s the same person.

Martin Howard Naylor. Could not find much info on Mr. Naylor on the internet. So here is a quote for you written by Dave Henderson in the mid 80`s; “After a brief flirtation with classical music Naylor built his own synth and started experimenting with sound. Setting up his own cassette/video label, Sorcerer Sound Productions (34, Bassingham Road, Wembley, Middx) he developed his own sound system and becoming a member of the London Musicians Collective he began to experiment with eastern instruments. A sample of his work can be heard on the Cause For Concern cassette compilation 'A Sudden Surge Of Power' (see CFC) and information and other tapes can be obtained direct from SSP.” From Dave Henderson’s “Wild Planet” series in Sounds, between 1983 and 1984.

Ny gate. Pop band that came out off the ruins from the punk band The Gate in Bodø early in the 80`s. On vocals they had Peter Pogo and the lyrics were a mix between punkish socialism and pure love songs. Ny gate was a good live band that got out a cassette and then a mini LP before they broke up. They was among the first bands from the punk/post punk area out of North of Norway to tour in Scandinavia. The band moved to Oslo at a late stage off their career, but it didn’t help them. They broke up late 80`s.
http://www.discogs.com/artist/Ny+Gate

System liliput. For more info, look at the last blog entry before this one.

Termisk sammenbrudd. Before Ny gate had broke up Peter Pogo had a project called Termisk sammenbrudd. This was a synth outfit that he started as a duo with Kmysle. After their debut concert it has been a solo project. As that he has done a few concerts and made ballet music for a ballet that Amanda Steggell made.
He had played in one off Bodøs first punk bands Hjertesvikt A/S before Termisk sammenbrudd. He quit after Hjertesvikt A/S had released their split cassette with The Gate. After Ny gate broke up he was involved in several Oslo bands like And The Balcony Fell, Bøyen beng, Pogomax, T-zers, Schweinhund a.o. Most known are his time in Jokke & Valentinerne, that later had line up changes and ended up like Jokke & Tourettes. Jokke is probably the most known composer off rock in Norway during the last 20 years. After his tragic death there has even been a road called up after him in Oslo. After this he has played in several bands like Valentourettes, SS Bondevik, Ronny Pøbel and in St. Thomas backingband, among many others. He has a silver medal in the Norwegian airguitar competition NM i luftgitar (!).

Vous. This was a solo project from Johnny Larssen. First he released two cassettes under his birth name, one off them was a split release with Martin Howard Naylor, before he ended up as Vous. As that he did a concert and then not doing music for several years.

Before he went solo he was living in Narvik, Norway. Here he was involved in several bands. Two off these has gone down in the history of Norwegian music as worth mention. First off all he was in the punk band Kriminel Ungdom. They changed their musically style to postpunk and had several line up changes before they ended up as Krim. U. As this they were on the cassette compilation “Null problem” and became a big underground band. At the same time he played in the progrock influenced band Slakt. They got out an album and then broke up. Since then they have had several reunion concerts.

He moved to Bodø early in the 80`s and went solo. After a break from music he came back as bass player in the postpunk influenced band Den tid…den sorg during the 90`s. Since then he has played in several bands in the more or less postpunk area from HumdinGer to Blaakraft among others. 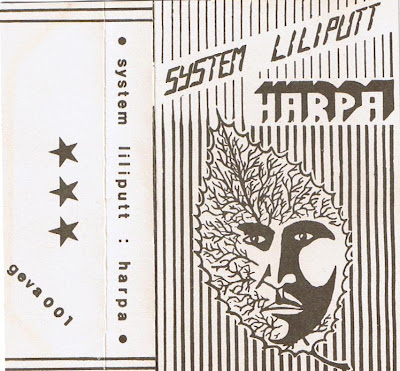 There isn`t much to say about System liliput, because the person behind this solo project clearly doesn`t want too much attention to him as a person. He wants his music to speak for itself. And it does. One off the best D.I.Y. tapes in the pop aera during the 80`s released in Norway.

It was mostly sold in Stavanger aera where Geir Vasseng is living. He plays every instrument as well as sing and has written all off the music on this mini album. As far as i know this is the only release, and it`s a shame. The world needs more pop like this.

"Harpa" came out on Vassengs label Geva Tapes & Studio in 1984. The cassette included six inlay cards. They are all scanned, as well as the cover, and included in the RAR (with the music) you can download at this blog. Soon after the release off "Harpa" the track "Gatelangs" was included on the compilation tape "Untitled" on Requiem.