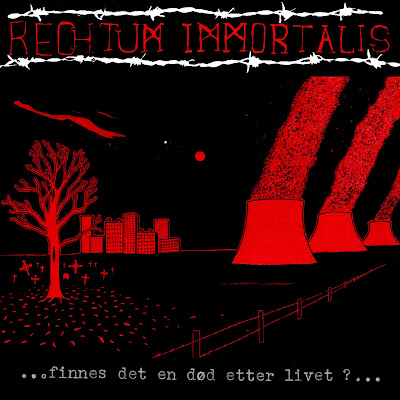 Sometimes things go down in a manner that leaves something unresolved, in a void, completed but the purpose disappeared. In 95/96, we had a peak where we felt we were playing rather well and we wanted to record something, probably for promotional purposes. So finally we did, but then we kind of got put on hold, our drummer at the time relocated and we couldn’t connect with anyone at the time, so we ended up being on hold till 2008. All this time we've had this recording laying about, it’s been mixed and remixed and re-mastered to improve the sound quality. Then, a little while back I decided to go thru with my idea to make this an free downloadable release, complete with a cover for printing, so that anyone who wants a hard copy could make one. Personally I’m pro MP3 and sharing such online, I feel that music should be available for people, and then people should buy releases they really feel for or support their favourites by going to shows, giving away mp3's, recommending, even donations to the artists they like if they feel like it. MP3's are our liberation from big corporation record labels that suck both their artists and fans dry.

As of just now, I learned that we will be splitting up after a final gig at Blitz in Oslo, the 27th of November 2009. And releasing this album the same day will somewhat finalize things and give us the opportunity to bring closure to the band. There are some rehearsal recordings and demo's lying about, which I might make available at a later point. If I do, I will announce it thru our MySpace or our Facebook group, simply named the same as the band. So, being that this is all my words, Id likes to thank my fellow musicians in the band, both the current and previous members, Id likes to thank our fans, old, previous and future fans, we made this for us, but were glad you liked it too.

They have contribution on these compilations; #1 #2 #3

AND NOW YOU ARE MORE THAN WELCOME TO DOWNLOAD (FREE OFF COURSE) THE ALBUM “..FINS DET EN DØD ETTER LIVET?...” HERE. (Old link still work) This Zip download includes front and back cover for those who want to burn a CD-R, and off course all the tracks. The album can also be downloaded from the Hypertonia World Enterprices blogg.
Lagt inn av NXP kl. 00:25 Ingen kommentarer: