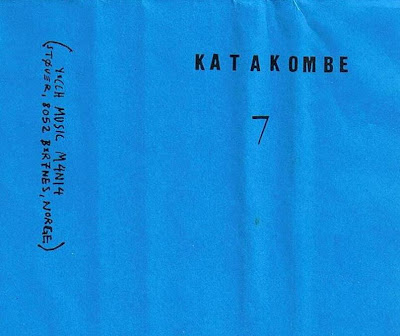 Katacombe was a series off cassettes that was released by Schrei Records first and after that by Industria Tepa. About the start and Schrei i have borrowed this from Discogs;
"Schrei Records was a short lived non-profit sublabel of Graf Haufen Tapes. formed in late 1983. All tapes were available for cost price or blank tape and return postage. The main attraction was the Katacombe series which features the main players in the worldwide tape scene of experimental and industrial music, as well as power electronics (then called hardcore electronics). The idea was to make the band and projects wider known."

Vol 1 - 4 was later re-released by the Dutch label Industria Tepa. This label continued the series and released vol 5 and 6. After that nothing happened before the Norwegian cassette label Yecch Tapes released vol. 7 (MC only). Seven has been some kind off a secret that few people are aware off so, here it is on Paranoia is Freedom. After the Yecch label more or less collapsed, the Norwegian label Hypertonia World Enterprices re-released it in a remastered edition that is still available, as CD-R, audio cassette and minidisc.

B 01 Alain Basso - Le Chariot
B 02 Exterminator - Kill Stefan Schwab
B 03 Nostalgie Eternelle - deceptive Idyl
B 04 Flatbush - Points For Review
B 05 Z.B.Z. - Flamme
B 06 Zeitgeist And The 7 Year Itch - Sequences For dreaming

Download and share the good music on your blog, to your friends or on any other way possible.
Lagt inn av NXP kl. 16:43 4 kommentarer: