NXP – It is from zero, in zero, that the true movement of being begins (PIF 34) 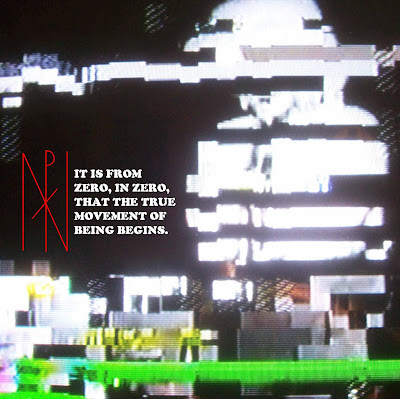 This album came out as a CD-R on Go To Gate Records (Bodø, Norway) (GO TO CD 006, 2007). It is now almost out of order from the label so it is about time to make it available for those who want to get it for free. For those who understand Norwegian you can read more about NXP`s former bands at this links; Asod Dvi, Psykisk tortur and Terror for Jesus. He has been in several other projects as well ranging musically from noise/industrial to cut up experimental to punk.

As NXP (aka Nekro XP) he started as early as in 1982 with experimental stuff inspired by groups like The Mesmerizing Eye, Mothers of Invention, Einstürzende neubauten and Boyd Rice/NON. Soon he drifted into John Cage, Steve Reich and Arne Nordheim. Inspired by the possibilities to create sounds that was correct for his mood, more than those already created drove him into a dark world off music that also had a touch of early inspirations from Black Sabbath, Boney M. and Joy Division. This mix off possibilities ended up as his debut album “Café muzak” in 1984. At that time he also made music in the duo Asod dvi. For every new album he changed his input to make music so no album sounds the same, but they have that NXP stamp on the music all the way.

After more than 26 years as a solo artist he had his debut concert at the local avant garde festival NØDUTGANG this summer. A festival he had been one off several people to start and run. In between those years he had been doing things like writing lyrics for several artists including Skjit-Lars and Mitti skritti. Arranged concerts, done fanzines, several poem collections, a book about the rock and pop scene in Bodø, Norway among other things. He runs a label called Requiem Productions where you can download all his releases on that label. He has also a www only EP out on the Ambolthue Records label that you will find here. Some tracks can also be downloaded from his MySpace.