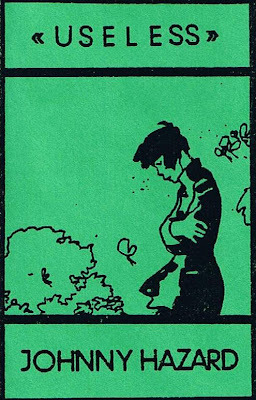 Johnny Liadal from Haugesund are for the rock interested mostly known as Johnny Hazard. As this he gave out a solo cassette in 1985 called ”Useless”. It was released by two different cassette labels at the same time. The sleeves has a few differences, the biggest is that the first track on side B has different title. It is the same recording and Liadal couldn’t give an explanation to this. He said that the listener has to choose witch title she/he wants. The titles are; ”Hunger Of Man” or ”Hungry On Man”. The release got a few fanzine reviews that were off the best kind.

As Hazard he gave out the fanzines ”Døgnflue” and ”Mutasjon” early in the 80`s. At the same time he played in the punk band Blister and from 1982 to 86 in a more new wave band called Im nebel. They was a mix between Velvet Underground and Joy Division. Im nebel changed style and name in 86 to pop and the name The Colors Turned Red. In 88 they released their debut album and in December same year they broke up.

Liadal has since worked with booking on Flytten in Haugesund through out the 90`s.

From 1990 to 2002 he also was a musician in the band Månen. As that on several tours and releases. On several occasions he has been DJing. In 2004 The Colors Turned Red was reunited for a jubilee concert in Haugesund. That was so fun that they stayed together for a track on a Christmas compilation and a EP the following year. In 2006 the gave out their second album “All The Way Up”. Since January 2007 has Liadal been working with booking on Folken in Stavanger.

Yes, the former prime minister of Norway is back from France. Why? Because Norwegian newspapers has gone bananas over her cheating. First off all she doesn’t pay taxes to

Norway, but she gets her pension. She uses public hospitals without paying as every taxpaying Norwegian can do, but she doesn’t live here anymore. And so it goes. She even worked for the World Health Organisation (WHO) where she had a big fight against the sugar, so where does she work now? Pepsi! All in all we don’t like so called socialists that cheat there way to the top. That’s not solidarity at all.

Back in the 80`s when she was a political rising star our local punk hero Skjit-Lars made a song about here. He didn’t like her as he sings in Norwegian; Gro Harlem Brundtland, you are shit! 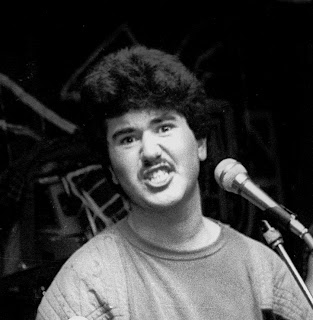 The song becomes so popular that it has been broadcasted on national radio P3. Skjit-Lars claim to fame is that he was the first Norwegian punk act to be released on vinyl in USA, when he was on the Maximum Rock`n`roll world punk compilation "Welcome to 1984". Since that he has done some shows and had tracks on a few compilations, including his compilation album "Shit Happens" where most off his projects/bands are included. The world still wait on the first Skjit-Lars record to be released. A bootleg tape that came out on You Bastards bootleg label is in fact the only Skjit-Lars release so far! "Shit Happens" is available through Go To Gate Records. That label has planes for a Skjit-Lars vinyl....sometime, hopefully this year, but i wouldn’t hold my breath waiting on it.