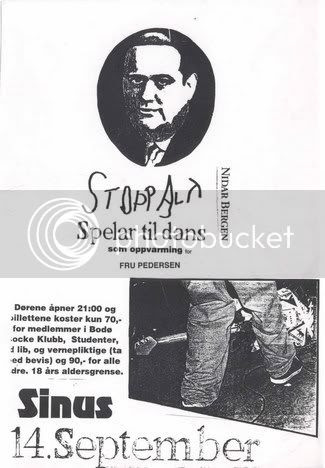 Stopp alt (Stopp everything) from Bodø, was from the start during spring 96 until they broke up; Stian Andreassen (drums/vocals) Tore Hartviksen (guitar) Pål Fredlund Hoff (bass) and Pål Taihaugen (vocals). Andreassen, Hartviksen and Thaihaugen is ex Extrem exem and Kellogs Kids. Andreassen and Hartviksen made one issue off the fanzine Glade dager before they moved from Bodø to Trondheim where they started Jimbo Jones, where they still play. JJ has recorded their debut album that hopefully is out during 2008. 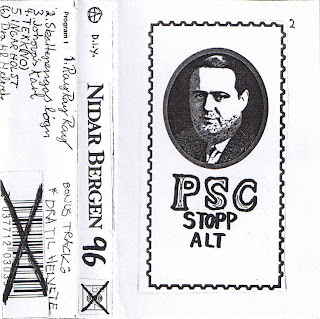 On 14. September 1996 they played support for the more known band Fru pedersen at Sinus, Bodø, Norway. Here is the whole concert.

No more uploads this year so have a smashing xmas and come back in the new year.
Lagt inn av NXP kl. 23:33 1 kommentar: