Quiritatio - As The Dead March, Birds Will Fall From Heaven (PIF 42)

Quiritatio, originaly from Sortland, but later relocated to Oslo, is no more. Their latest studio album will probably never bee released outside the scene of free download bloggs, so here it is. 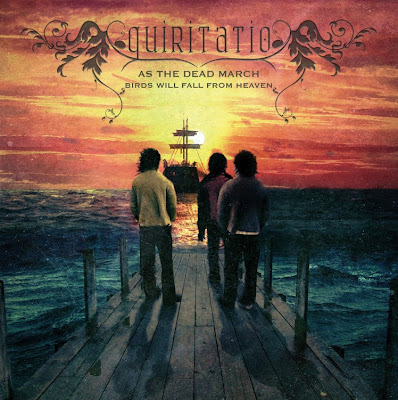 Before you download it, here is what they want you to know about them (from their MySpace);

Quiritatio did it's first mini-tour with Dominic (Trondheim) the fall of 2004. Untill autumn 2004 they did not record any of their material. Further above the arctic circle in Tromsø they made their very first demo, with good help from Andreas Lorentsen. The demo spread out and Quiritatio started playing more shows. After a while, realizing their luck as a collective band was unfairly portioned - with injuries, members quitting, faulty equipment, sickness and cars blowing up - they still decided to record their first full-length bastard wich was given the name: "Forgive And Forget." Produced in Bodø by Hallstein Sandvin - artwork by Ola Waagen. After a tour in Iceland 2006 - they got the idea of making a 7" called "Yana" with two songs about a girl. It became their mission the 8 remaining months of 2006. Quiritatio recorded Yana as a 7" EP in Bodø, and it was released January 2007 by Trapped Inside Records - - Bullet Records and Bad Pingu Records. Right after recording the 7" they released it and went on their first europetour 2007. Massive feedback on the 7" led to one more eastern europetour including England the summer of 2008 - and a re-print of Yana - a limited edition. Petr Cernoch, a friends of theirs from the previous europetour of 2007 inspired them to record their new material. The recording started in 2007. Playing shows on and off, relocating all members to Oslo - recording and mixing for almost two years on and off - "As the dead march - birds will fall from heaven" was done in 2009. Two vocalists of Quiritatio during this period made their girlfriends pregnant, and became parents. With a band-break for about 6 months while some members lived outside Norway, some members felt it was time to pull the plug for personal reasons. Even though the record was ready to be released - artwork done and the master finally pieced together - it still felt like the right thing to do. The whole record was released for free over the internet, with mp3, lyrics and artwork. Quiritatio wishes to thank everyone that has been involved. Happy holidays. Ex-Quiritatio.

And here it is in MP3 (256) for you pleasure; As The Dead March, Birds Will Fall From Heaven (new link!) cover is included.

Here is the tracklisting;