We are talking about a punk-jam trio. Original line up was; Aage Asphaug (drums) Remi Larsen (bass) and Petter Pogo (guitar/vocals). They had their debut concert at Gimle in Bodø 3. March 1986. Their debut was four tracks long and half was their own compositions, the other two was cover versions off Wayne/Jane County and Public Image LTD. Asphaug has played in among other things in Svartedauen and Sekunda mannsverk. Larsen played in one off the best bands from Bodø; Cakewalk. Pogo has been in several bands in Bodø before he moved to Oslo and joined Jokke & Valentinerne among many other bands. 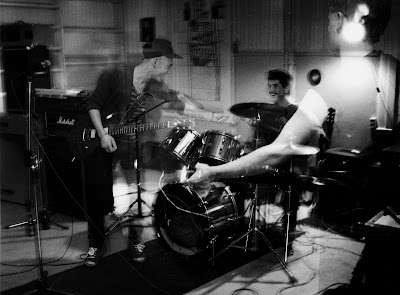 (from left to right; Pogo, Nicolaysen, Larsen. Photo; Morten Andersen)
At the next concert Lars Nicolaysen become the new drummer. After this concert they did a last one where Lars Myklebust played the drums, Ørjan Tverbakk on bass (both ex SnowCats), Peter Pogo on backing vocals and Lars Nicolaysen on lead vocals. Through out their short time they stayed true to their punk spirit.