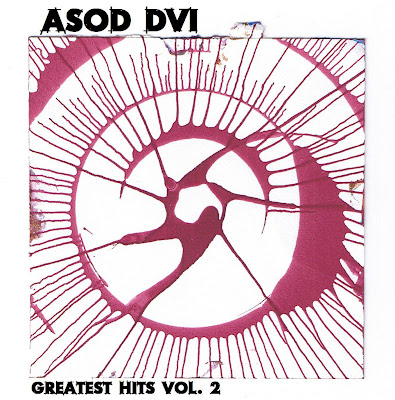 Here is the ASOD DVI – Greatest Hits VOL 2. This is a CD-R that will be released on Requiem Productions 18. April 2009. This is a compilation off tracks from several compilations as well as from their own releases, and unreleased tracks. Download it here. (new link!)

Official MySpace.
If you read Norwegian you can learn more about the duo here.
Discography at Discogs.


21-1 (in this mix) This is a remix of their contribution to the “Adios Amigo” MC. It was made several mixes, one was included on the 6x10=60 compilation tape, This mix was intended for a compilation off remixes, but it was never released.

1917 (edit) Unreleased track I found on a tape years ago. Can’t remember when we recorded this one but if it was recorded at the same time as the other stuff on the cassette I found it on it would have been sometime in 1986.

A.D. Sakharov Recorded for the compilation LP “Psychomania”. It came in a limited edition with hand painted sleeve before the “normal” printed sleeve edition. The track is our support to Sakharovs fight for peace.

Café De Flores Track that was included on the compilation “The Neck Party” in 1986. This was recorded in 1985 for another compilation in Spain that never was released as far as the band know.

Det synkende skip About the same time as Katacombe vol 2 came out Asod Dvi got a request for the next Selbsmordorganizatione compilation. So NXP recorded the second track in Asod Dvi`s history and the last as a solo artist under the Asod Dvi name. The track is called Det synkende skip (the sinking ship) after a headline in a local newspaper.

E.S.N.R.S. (Side A) off the single cassette release in 1986. Later this ended up on the compilation “The Neck Party” as an untitled If, Bwana track.

Greatest Hits VOL 1 Someone had taken all the recordings by Henry Cow and mixed those together into one track on the Miniatures compilation LP. We thought the idea was brilliant but we wanted to do our twist on it so we took a few seconds from every track and made a collage out off it.

(A New Generation Ov Freedom Fighters Following Jim Jones Example Ov Living In) Harmony and Peace Another collage/noise track made for the Yecch compilation Katakombe Vol 7. We took what we had in the noise department and jammed this track together.

Hey, What`s The Matter (another remix) Unreleased remix, that wasn’t used on the Great Evening compilation. I wonder why for this mix is so much better than the one ended up on the compilation.

Like This (remix) On the compilation “Europa 6 (Norway)” the original version of “Like This” was included. Well we was never satisfied with it but because off short deadline we agreed to let it go. It is probably the thing we regret most about in the history off the duo. Long story short we did a remix that we mailed just weeks after but it was too late. The compilation was already released. So here it is for the first time the mix we could live with.

Messed Up (Brain Damage) This track was the last that was released in the Asod dvi history. It ended up on the compilation LP for Blitz in Oslo, Norway, called “Blitz Hitz”. From Blitz own www “Blitz is an autonomous counterculture-centre in central Oslo. For over 25 years Blitz has been fighting oppression, government control, culture commercialisation and passivication.”. The track was also used on a program about the “Blitz hitz” album/Blitz at the national broadcasting TV station in Norway, NRK.

Natures Trick For the compilation “FFFFF”. This track was made during our most heavy Psychic TV fascination.

Orgasm In A Plastic Bullet From the album “We Live In Black And Die In White”.

Re Edition ov A John Cage Symphony The title says it all I think. Was to be included on a compilation, can’t remember witch, never the less it was not included so it doesn’t matter any more. Unreleased until now. (Look at comments for more information)

Schön, sehr schön/T.B.L. Collage made for the compilation “Can A Butterfly Smash A Wheel?” that was a sort off who is who in the underground music scene in Bodø, Norway (just north off the Arctic Circle) in the mid 80`s. Soon after the LP was out this was re-released with several bonus tracks on MC in Czechoslovakia.

She Said So First track recorded and made. It was early in 1984 after getting an invitation to do a contribution to the Katacombe Vol. 2 compilation. "I took a bunch off records from my parent’s record collection that was seriously damaged so that it became unwanted loops (well I welcomed them anyway). I mixed this together with some scratching on top." says NXP about this track. Probably the first recording released with a Norwegian artist doing scratching.

Sleeping In Snatches This one was included on the 6x10=60 compilation tape.

The Love Song A track that was made for the national broadcasting TV station in Norway, NRK. It was intended to be used in a TV series about the music scene in North Norway. The track is recorded in Tromsø at NRK studios with their producer. The track is great but the video to the music was too controversial for NRK, so they turned it down and didn’t make the video and didn’t use the track. The video should have been original footage off Russian prisoners during WW2 in Norway marching in the rhythm off the track, that’s it. This was to focus on those prisoners none talked about faith. They were tortured to death in working camps. Thanks to the Russians we have railroad to Fauske, thanks to the Russian we have better roads etc etc. We have so much to thank them for, and so much to be ashamed off. The Russians has not got the recognition for their impact on our daily life, over 50 years later it is still so controversial that it can’t be talked about in Norway. “The Love Song” was our little homage to all those Russian prisoners, and victims off war. The track was later used on the compilation “State of the Art”.

Too Many Risks (fellatiomix) From the album “We Live In Black And Die In White”.

Untitled (Again) This is a different version off the track used on the compilation “Im labratorium”. Unreleased.

Untitled (Not Again) This is a different version off the track used on the compilation “Im labratorium”. Unreleased and turned down by Insane Music that asked for contributions for their compilations. They didn’t like it, well OK then we thought and that was that.

Waves As a kid I used to listen a lot on the radio and all the sounds that was between the station was sometime so magic that my listening could end up right there. Usually I would wake up in the morning with a completely different wave-symphony and my head full off strange dreams.

"Re Edition ov A John Cage Symphony" was one of the two tracks submitted to Katakombe 7. I only used one, since I thought more people would be interested if the tape was normal album length (45 minutes, rather than the usual 60 or 90). It worked, too!

And thanx for the music!